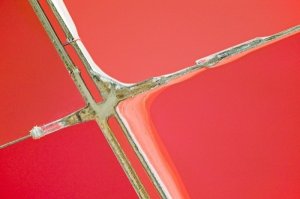 Recognized as one of the world's leading architectural photographers

The McLoughlin Gallery is an approachable, inviting gallery with a social conscience. The main focus of the gallery is to educate and intrigue by showcasing established European contemporary artists and local emerging artists while giving back to the community. Come visit us soon...

The images represented here were taken from helicopters flying at altitudes of 500 to 5000 feet over the fringes of the San Francisco Bay and its tributaries. Most depict areas from the southern tip of San Francisco Bay to South San Francisco on the western side and to Alameda on the eastern side. The remaining photographs come from other areas as far north as Suisun Bay.

My interest in these tidal areas developed quite by chance while flying on commercial assignments over much of California. Some of my pilots fly out of the Oakland, Hayward, and San Carlos airports, and our flight plan invariably takes me over some part of the bay I quickly found that I was fascinated by the coloration, shapes, and reflections that combined with each other where the waters of the bay gave way to land. I was viewing scenes created by tidal ebb and flow, the intrusion of commercial interests, and nature’s constant readjustments to these forces. The results were beautiful, unusual, and sometimes disturbing abstract images. San Francisco Bay is a massive water collection and discharge system pumping billions of gallons of water daily using its tides and tributaries as engines. The edges and corners of the bay exhibit the most visible changes on the ground with the south end of the Bay being the most pronounced. These areas are like the edges of a sink that are left with residue after it has drained. From the air the evidence of this activity is even more dramatic. Currents can be seen creating channels of water rushing in different directions running side by side, the incoming one color, the outgoing another. As the water recedes, streams, rivulets, mud, rock, scars, and debris become visible along the shoreline with unusual light reflections and color changes. Color in the salt pond areas of the south end of the bay can become particularly intense.