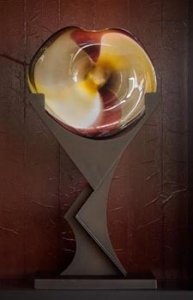 Rick and Janet’s dedication to glass blowing is evident in the excellent quality of their work. The emphasis in their small studio is on creativity and innovation. Each piece is a free-hand expression of the excitement and risk-taking found in an experimental glassblowing studio.  Following his university education, Rick Nicholson operated a pottery studio full time in southern California from 1974 to 1981. Janet left her photography job in 1979 to freelance and create designs on Rick’s clay forms. They were married the same year, and their artistic collaboration began. By 1982, they were called to concentrate on glass alone and settled on 9 acres in Auburn, California.  Their work involves figurative sculpture, sculptural lighting and multiple piece wall and ceiling installations. Many works have been commissioned for hotels and private residences internationally. Rick’s studies in metals, hot sculpting and glass casting have allowed the work to expand.