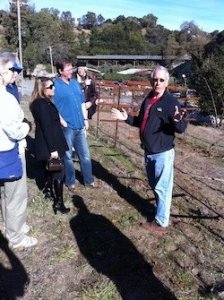 The sunny days, moderate nights, and long growing season of the Santa Cruz Mountains, which are south of San Francisco and overlook the Pacific Ocean and the San Francisco Bay, have long been recognized as ideal for world class wines. The Garrod family began involvement with California agriculture and open space in 1893, purchasing lands from the Mount Eden Orchard and Vineyard Company. Our label recalls glorious apricot and prune blossoms which enhanced spring views from our hillside early in the previous century. Since 1972, aging orchards have been replaced with grapes which thrive in this microclimate. So continues the agricultural tradition begun by winemaker Bill Cooper and vineyard master Jan Garrod's great-grandfather. Winemaker Emeritus George Cooper refined his craft by learning from his fellow vintners in the Santa Cruz Mountains, Napa Valley, Burgundy, and Bordeaux.

Visit Cooper-Garrod Estate Vineyards for the year-round perfectly inviting outing What does a NASA Test Pilot, raising horses in Silicon Valley, and making wine have to do with one another? The answer is – the passion and vision of George Cooper, and his very engaging and enterprising family. The Cooper-Garrod family is at the forefront of California winemaking history Their story begins in 1893, when the Garrod family purchased land from the Mount Eden Orchard and Vineyard Company in the picturesque hills above Saratoga, California. Apricots and prunes grew in these foothills of the Santa Cruz Mountains, as did thriving winegrowing vineyards. On a neighboring hilltop, Paul Masson built his famous chateau and winery, and sparkling winemaking facility (it was called Champagne back then – but, that’s another part of local lore and history). Just down the road a bit, in 1852, Etienne Theé founded Almaden Winery, also in Saratoga, planting some of the first domesticated French wine varietals in California wine history. Thirty three years after that, in 1885 Dr. Osea Perrone purchased neighboring land and founded Monte Bello Winery – on the property that is now a part of Ridge Vineyards – producing the first vintage under the Monte Bello Winery name in 1892. A growing wine-centric culture was in the making By the late 1890’s, the area around what is now Saratoga, was becoming recognized as one of the finest winegrowing regions in the world. The Novitiates established a winery (as a part of their educational facility) in Los Gatos, California in 1888. There were now hundreds of acres under cultivation in the Santa Cruz Mountains, and the amount of wine being produced was among the largest and most notable in California. The Napa Valley, by comparison, saw their first winery established and producing wines in 1861 – Charles Krug – the Mondavi family. By 1889, the Napa Valley began to grow more wine and began to eclipse the Santa Cruz Mountains and Santa Clara Valley in production and influence. Fast-forward in wine history to the union of the Coopers and the Garrods In 1941 George Cooper married Louise Garrod, and was almost immediately hustled off to World War II where he flew fighter planes in the European Theater. After the war, George returned home to the Santa Cruz Mountains and pursued a successful career as Chief Research Test Pilot for NASA. George retired in 1973, and looked for something to do to occupy his time. Educated as a mining engineer, he was no stranger to the mountainous condition and soils surrounding the Cooper-Garrod family property. The fertile ground and climactic conditions in the Saratoga Hills, plus the coastal influences of the San Francisco and Monterey Bay areas, provided just the perfect environment for winegrowing. Just as Paul Masson and Etienne Theé had found, the area was perfect for winegrowing and winemaking. One winemaking adventure led to another For 20 years, from 1973 until 1994, George set about to learn about making wine – from the vineyard to the glass. During this time the wine he made was only for his family. Jan Garrod, George’s nephew, caught the wine bug early in life, and began working with his Uncle George from the beginning, helping to plant the grapevines, and stomping grapes in an old bathtub in his younger years. Jan is tending to the ever-expanding vineyards to this day. As the operation grew, the decision was made to go commercial in 1994, and the family owed vineyards have been the cornerstone Cooper-Garrod Estate Vineyards. In addition to the rustic vineyards and winery, Jan Garrod oversees a thriving equestrian facility with over 200 head of horses. A friendly welcome can be expected at Cooper-Garrod Estate Vineyards When visiting the Cooper-Garrod ranch, conveniently located in the Saratoga foothills, one gets the feeling of stepping back in time. The rustic tasting room is fastidiously managed by family member, Barbara Cooper. And, always around the property are the ever gracious family members Bill and Doris Cooper. Bill, George and Louise’s eldest son is a celebrated winemaker, and is responsible for sales. Doris, Bill’s wife, is marketing director, and is often found pouring the family’s wines with Bill at events around the San Francisco Bay Area. Enjoy the Wine Explorer Tasting Card experience at Cooper-Garrod Estate Vineyards Members of the SignatureWines.com Wine Explorer Tasting Card program, wine tasters can experience complementary wine tasting once each month, and take the Cooper-Garrod wines to any of the restaurants in the SignatureWines.com portfolio of fine dining establishments, and receive complementary corkage on a monthly basis. While at Cooper-Garrod, check out the facilities for events, weddings, and corporate functions. Then explore the stables, and available excursions such as a ride through the vineyard with winemaker, Bill Cooper, followed by a wine tasting in their rustic tasting room. In the tasting room, be certain to request a sample of the “Test Pilot” wine series, named in honor of Emeritus Winemaker, George Cooper. It’s a perfect outing just about any time of the year.


Enjoy Complimentary tastings once each month at this winery and many others by enrolling in the SignatureWines.com VIP program today!